The Lüning family travelled via Quakenbrück and Verden to Sulingen. In 1773, a Farm, owned by the former mayor, Mr. Krämer, was acquired. Subsequently, the adjacent Junkerhof was also purchased evolving the estate into a manor, which is the current residential building Lange Str. 69. In 1779 Christoph Friedrich Lüning built an agricultural grain distillery. From the Electoral Government of Hanover, he received the license to lead the first mail relay station.

After his death, Rudolf Friedrich Lüning took over the business and further expanded it by purchasing another farm in Feldhausen, in the outskirts of Sulingen. In 1880, His successor Karl Justus Rudolph Lüning acquired the watermill and grist mill for distillation purposes. He majored in engineering and, in cooperation with the Technical University of Hanover, he carried out extensive modernization work in the distillery industry, which at the time was trendsetting in Germany.

Around 1980, Ernst Eckart Lüning extended the range of the distillery and introduced the wine trade. He bought the old department store Ranck, which is located at the intersection next to the church. Through extensive renovations and restoration, he returned the building back into its historic half-timbered beauty and named the wine shop after its original use as police station the "Old Police Station ".

The preservation and long-term continuation of the almost 300 years of family-owned businesses and associated historic buildings is the goal of today's generation, which led to the transformation of the companies into several charitable foundations. 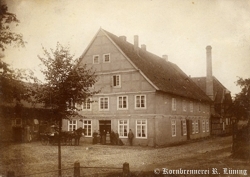 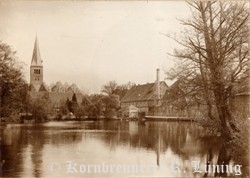 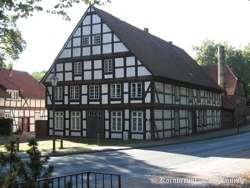 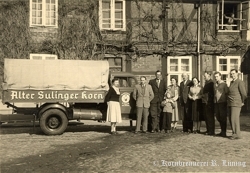 As previously mentioned, the Lüning Manor has owned a grain distillery since 1779, which was installed by Christoph Friedrich Lüning and then fundamentally modernized by his grandson Karl Justus Rudolf Lüning (1832-1912), between the years 1900 -1906.

The waterwheel was replaced by a turbine and a large brick chimney was erected, which still stands between the house and the distillery. The distillery produced alcohol for the free market and marketed it itself until 1922.

The BfB tied the distilling license to agricultural arable land and annually redefined the allowed volume of alcohol to be produced that year in liters of alcohol 100% vol (LA). 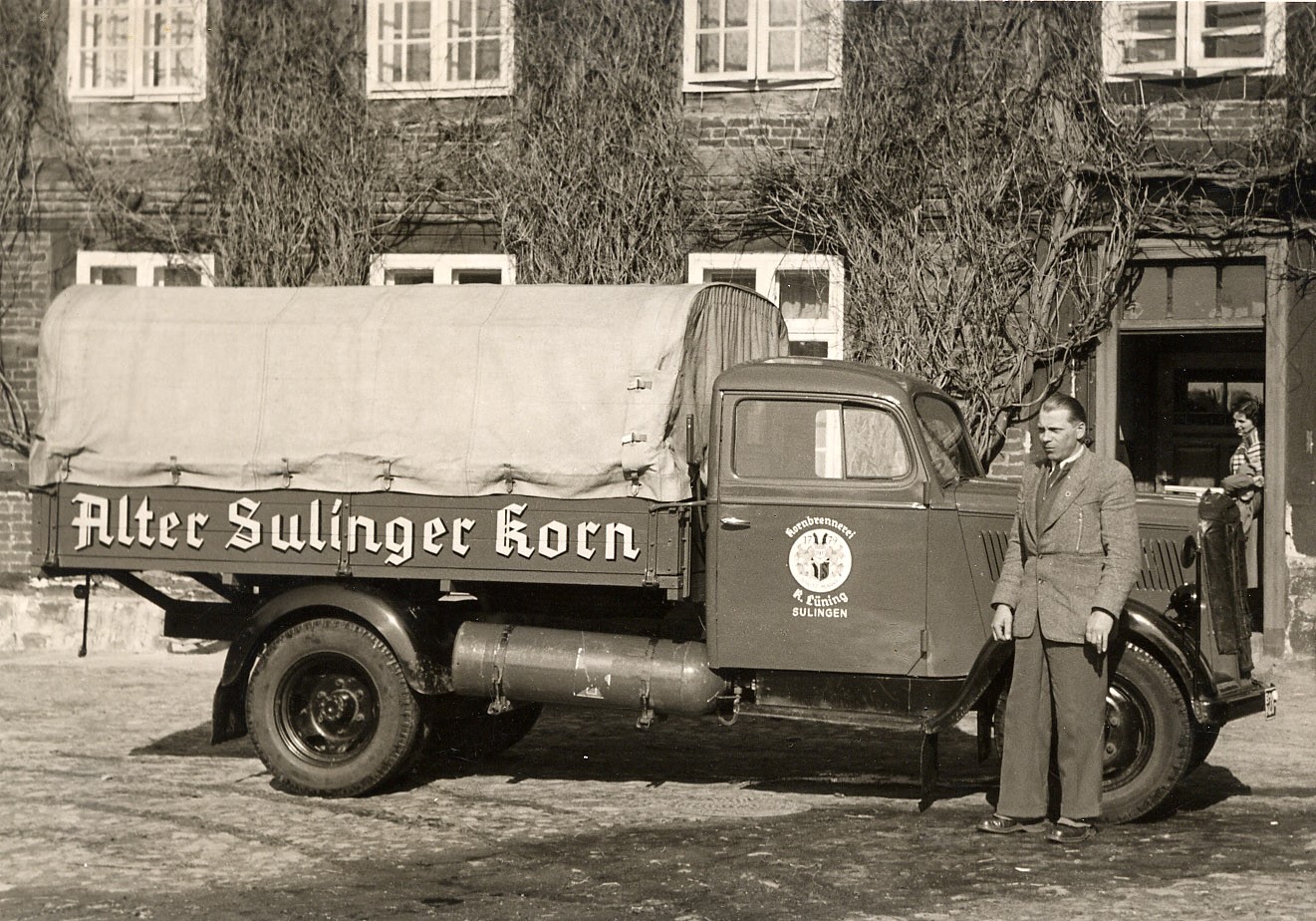 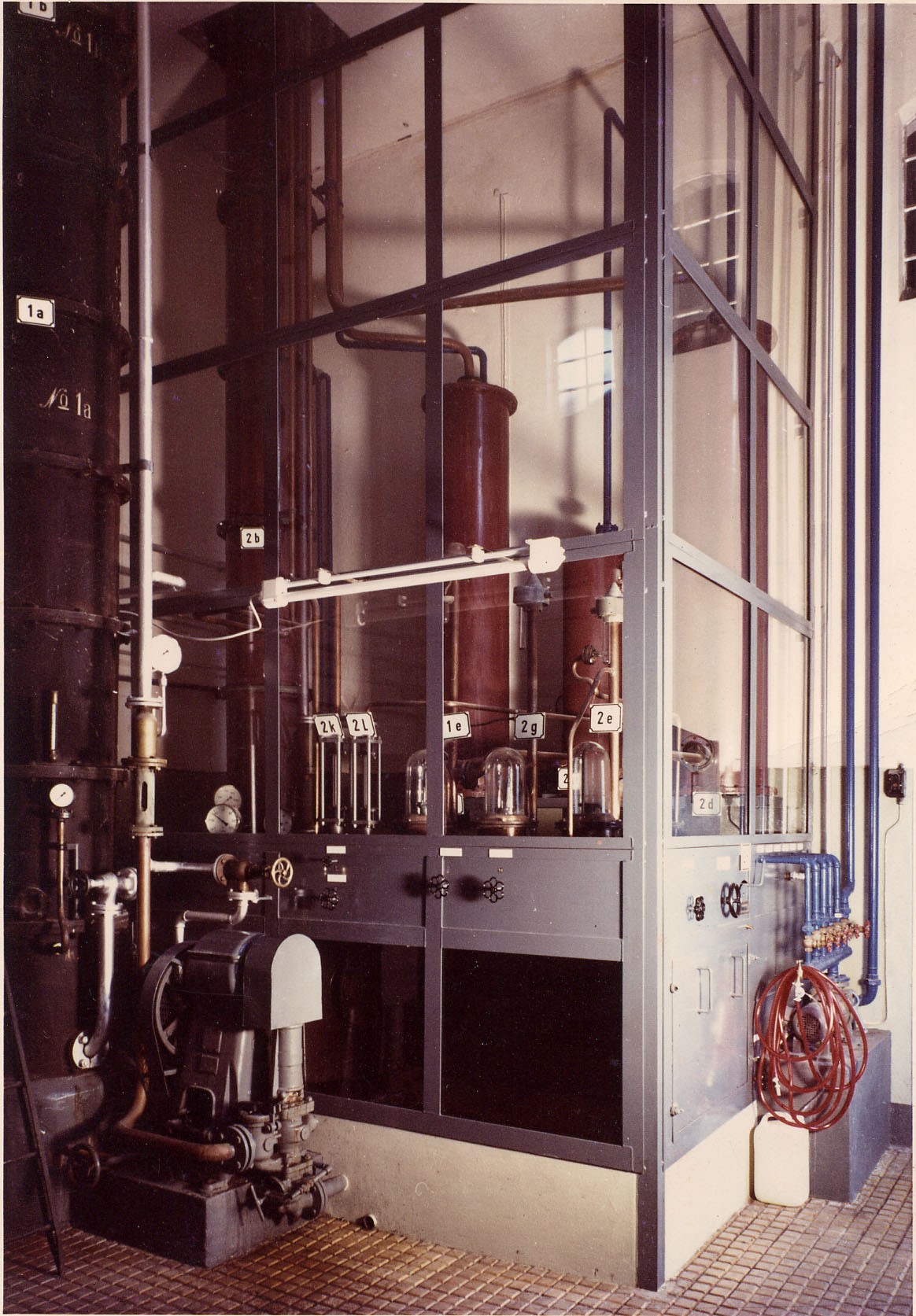 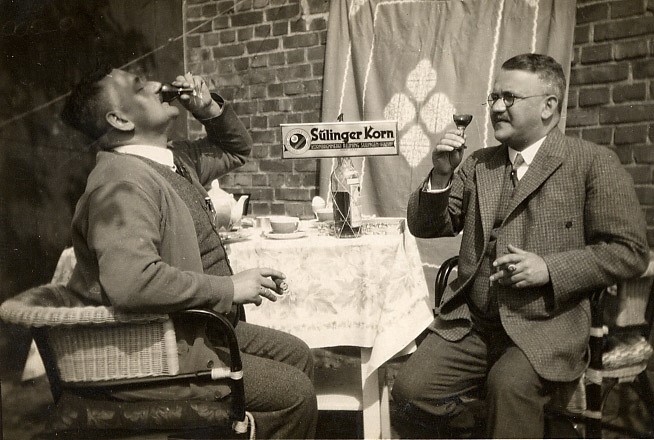 The raw stage takes place in a column, which consists of copper and is equipped with 16 so-called bubble cap trays. Due to the siphon effect, each bubble tray practically represents its own a distillation process. In this case, there would be 16 distillations that could reach a liquor content of approx. 84.5% vol ALK.

In the upper part of the 8-meter-high copper column, there is also the dephlegmator, which is also made of copper. Its liquid coolant constantly cools the produced spirits’ vapors to prevent it from entering the condenser too quickly and liquefying.

This intended braking mechanism generates the first full wheat aroma in alcohol, after completing the second step, travelling through the rectification column, it turns into a fine distillate.

To do this, we add a portion of alcohol, some foreshot and feint from the previous day and some water into the still. Thus, the term batch process, because the still has to be filled again and again. The still column and fermentation tank, however, is continuously filled with up to 4000 liters of wheat mash and emptied only after it is completely processed.

The fine distillate still also has bubble cap bottom tray and thus comes to an alcohol content of 96% vol alcohol.

In order to separate the foreshot from the middle cut, the old distiller had on the one hand his schedule and the certain instinct for the unit, but also a small tap for sampling.

This little sensory check before switching from the supply tank to the main tank of the heart of the run was of course familiar to one Sulinger or the other. So, they came by the distillery at specific time during the day, a sheer coincidence of course, and hoped on getting a sample of Sulinger schnapps from the master distiller himself, which was often done through the distillery window facing Langen Street. Of course, there were no customers for the feint, because they knew that the taste of the feint no longer met their high-quality standards.

On 1 January 2018, the strict Spirits Monopoly Law was abolished, which in turn eased a number of different laws relating to distilling spirits.

Thus, the Lüning famiy’s 9th generation has once again begun producing and engaging in its in-house, assurance of quality and taste criteria for its fine distillates, using our centuries-old experience that has been passed on from generation to generation.

Currently, the installation of a custom-made still for batch processing is being planned for the future. Who knows, maybe the small window on Langen Street will open again and people will philosophize about when to walk by at the right time to catch the separation of foreshot and middle cut, and to get a sample of Sulinger schnapps.

Give us a call:

or drop us a line:

If you have any questions, feel free to ask!